This has been the season for voting, for elections, winners and losers. Elections are ﬁne. Though it is true, too, that the candidates running for elections aren’t always the best for a position. It’s just theirs were the only names to appear on the ballot. ln that regard, the PMA did many musicians a favor by including their acts on the Crystal balloting. But so many important acts were left off the ballots completely, I feel compelled to contribute my own awards for what I consider to be the best among the many good musical acts this city has to offer. Because I don’t have a hunk of wood or anything that I can give the winners in each category, instead I will award each a dollar. What the heck, it’s the least I can do. 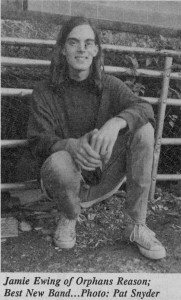 Best Studio: Sound Impressions
With Bob Stark behind the board.

Best Engineer: Drew Canulette
Drew’s work on the Bums’ Bliss is stalwart. One of the few local engineers ever nominated for a Grammy.

Best New Club: UFO and Belmont’s Inn
Both clubs exhibit a willingness for experimentation within their own realms, and beneﬁt from a decided lack of pretension.

Best Role Model: George Touhouliotis
Many people connected with Satyricon embody the commitment to freedom of expression, but George is the one who gets his butt sued.

Best Rock Writer: Me
Hey, they’re my awards. But Fiona Martin is doing a great job at Wee Wee.

Most Devoted to a Sound: Fred Cole, Dead Moon, Tombstone Records
Fred sounds legitimate, unadorned, and pure when he signs. His records always reflect that philosophy.

Best Metal Band: Love on Ice
They’ve got what it takes—and that’s what it takes to be the best metal band. I guess that says it all.

Best Blues Recording: Voodoo Garden –Tom McFarland
Just about as real as you get. In a city full of Blues posers, this rings true.

Weirdest Recording: Bazza and the Clouds of Ooort – Bazza
Hands down.

Most Improved: Oily Bloodmen
On those good nights, which seem to happen with more frequency.

Most Sorely Missed: Monica Nelson
Where have you gone?

Most Versatile: Lew Jones
Lew always does what he wants to do, and usually ends up doing it well. Most deserved his PMA Crystal.

Best Perfomance Art Band: Hitting Birth and Beauty Stab
Both of them, in their way, for obvious reasons.

Most Sincere: Killing Field
By a landslide!

The One That Got Away: Red String
It’s so hard to keep a band together. 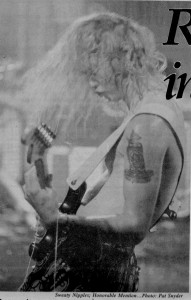 Best Compilation Album: I-5 Killers
Something for everybody on this mixer.

Soundman Beyond the Call of Duty: Ray Brown, Satyricon
Utility inﬁelder Ray has a tougher job than anyone I know.

Best Soundman: Billy Triplett
Billy has great ears and is unﬂappable under ﬁre.

Best Doorman: Curtis, Satyricon
If Curtis doesn’t want you in, you’re not going in.

Biggest Mystery of the Year: Tim Moreau
Whatever happened to that guy?

Biggest Fan: Pat Snyder
Pat loves everything about rock music that Is speclal. Her exuberance and dedication are unmatched. 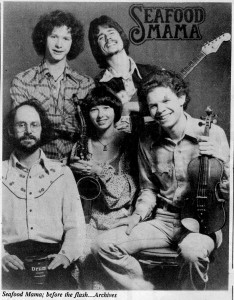 Marv and Rindy Ross of Quarterﬂash had been sorting through some old tapes not long ago, when the two of them ran across some Seafood Mama selections. It occurred to them that it had been ten years since the band had broken up, to become Quarterflash. The break-up was not without some strained feelings among the departing members. Marv and Rindy had lost close contact with bassist Blaine Moody and drummer Maury Woodruff, though they kept in touch with violinist Bruce Sweetman from time to time.

Shortly thereater, Marv and Rindy were seeking an opening at for their New Year’s Eve at the Melody Ballroom, when they began to wonder if Seafood Mama might not be the right band for the gig. They called Bruce in Nashville, where he does session work as well as playing with the Nashville and Macon symphonies. Blaine Moody has been living in Estacada, managing a landscaping business playing in a country band on the side.

Maury lives in Bend and plays in a band called the Vermin From Venus. All agreed that the reunion sounded like a fun idea.

Marv said the band intends to play for over an hour, playing some of the old favorites: “Hold the Mayo,” “Seafood Mama,“ “Your Mama’s Just Another Trucker.” Et al.

Apparently this has been the season for reunions for the Quarter Flashers, for recently they reunited with their old college folk quartet Broomstreet for a day of musical reminiscence. Ah, memories.

But as for the reunion of Seafood Mama at the Melody Ballroom. Marv says “We‘re striving to book the downstairs bar as well, for our older fans who can’t handle the volume anymore.” That’s kind of a depressing thought: I guess you’re never too old to rock and roll, but your ears do get too old for the intensity level. Whatever, it should be a gala affair for all involved. For those of you too young to remember Seafood Mama, this is a great opportunity to see one of Portland’s all-time great live acts. There has not been a band since to equal Seafood Mama’s pure sense of fun and entertainment.

Marv also mentioned that the new Quarterﬂash album will be released in the first week of February, with the first single, the ballad “ls lt Any Wonder” to precede it by a couple of weeks. “Yeah,” Marv said, “we wanted to go with thE rockier ‘Girl in the Wind‘ for our first single, but the record company didn’t know if our audience would go for a rocker. Our audience? I have no idea who our audience is at this point. And record companies can be such cowards. But it is true that ballads usually do pretty well in the charts and ‘Is It Any Wonder” is a pretty song.”

The latest version of Quarterﬂash is by far the best. Bassist Sandin Wilson and drummer Greg Williams make for one kick-ass rhythm section. Doug Fraser plays searing guitar solos and Melanie Kubik’s cool keys and scintillating backup vox take a lot of the vocal pressure off of Rindy. Rindy does not play the sax much in the new band, sticking primarily to rhythm electric guitar. Marv even sings a few songs, exhibiting a charming gruff counterpart to Rindy’s sweet, birdlike contralto. They are still Portland’s all-time best Pop band. This is a good time to check out Quarterﬂash in a vital transitional period.