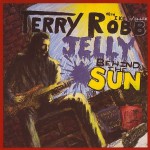 Jelly Behind the Sun
Terry Robb with lke Willis.

Recorded at Spectrum Studios, with a veritable plethora of Portland’s finest R&B session players. Robb’s JelIy Behlnd the Sun is mostly a disappointment, all the same. From the initial title cut, nearly six minutes of unequivocal drivel-to the final, pedestrian re-hash of (early) Fleetwood Mac’s “Rattlesnake Shake,” this recording fails to tread emotional water: drowning in deep pools of ambivalence and boredom. Though there are moments of ﬂickering brilliance, i.e. the scintillating groove drummer Greg Fisher melds on “Peavine” with bassist Phil Baker and Robb on slide guitar fills, and chunky rhythm guitar.

Greg Perry’s Hammond organ is a good addition on “Say Yeah.” And Ike Willis could sing a proctology manual and make it sound soulful. But some production decisions seem ill-conceived. Baker‘s odd hiccup of a thumbslap bass on “Say Yeah” is annoying. And Robb’s solos seem lifeless and thin in the mix, failing to stand out with the sort of authority you might anticipate. Janice Scroggins adds a touch of gospel brimstone piano to “Happy Home.” Robb’s slide work is a series of well-executed cliches. Signifying not a whole hell of a lot.

The acoustic ﬁnger picking and slide showcased on “Boogie Woogie Dance” works much better for Robb, as he seems not so overshadowed by his support. He is a good guitar player, accurate and precise—but there are times when Robb attempts to disguise a lack of ﬁre and passion through trite tricks. In a live situation, this approach might work, sometimes. On record it sounds like musical Legos snapped together to make a little song.

Sort of like the stupid title of this recording, things just don’t hold up that well here. Just what is jelly behind the sun? That picture fails to congeal in my mind‘s eye. The atrocious cover artwork does nothing to explain the metaphor. Don Campbell‘s witheringly poofy liner notes can only muster esoteric blather: “Jelly behind the sun. Listen and you will know.” Oh. I see. Well, listen, Don, man. I did

listen and I still don’t know. What the hell is jelly behind the sun? lf it’s some sexual connotation you want guys, there’s another satellite that’s closer, with perhaps a more symbolic name: the moon.

Something for everybody here in, by far, the best and most complete sampler to emanate from the Northwest. Like the venue itself, the menu here is eclectic and varied. We’ve got your big name draws like Napalm, the Obits, Crazy 8’s. Dharma Bums and Greg Sage. Popular favorites like Poison Idea, Oily Bloodmen, Jackals, Sweaty Nips and Killing Field. Industrial strafe rock by Hitting Birth. Poetry by Walt Curtis and Marty Christensen. Even an entry from those loveable heroes of yesteryear, the Miracle Workers. All tied together in a l6 l/2-cut package. Neat as you please.

And almost all the cuts are exclusive, with only Napalm Beach’’s “The Plague,” (from Liquid Love) and Crazy 8s’ “Work Or Beer” (from Doggapotomus World) are readily avaiable elsewhere. Hence, the sampler works as an excellent showcase of some of Portland’s best underground bands.

By and large, the sound quality is superb: mixed and engineered by Drew Canulette at Dogfish Sound. Only the Obituaries’ “Answer Me” is a live recording. The rest appear to be studio takes culled form across the city.

Napalm’s “The Plague” is aptly suited for the collection “Heroin…took another friend.” The song is surely familiar to faithful Beachers. The Obituaries’ “Answer Me” is suitably sloppy for a live recording, but it more than adequately captures the boiling gasoline delivery and blowtorch sentiments extruded from the being of Monica Nelson in her prime. Rob Landoll’s steamroller guitar work stands out as well. 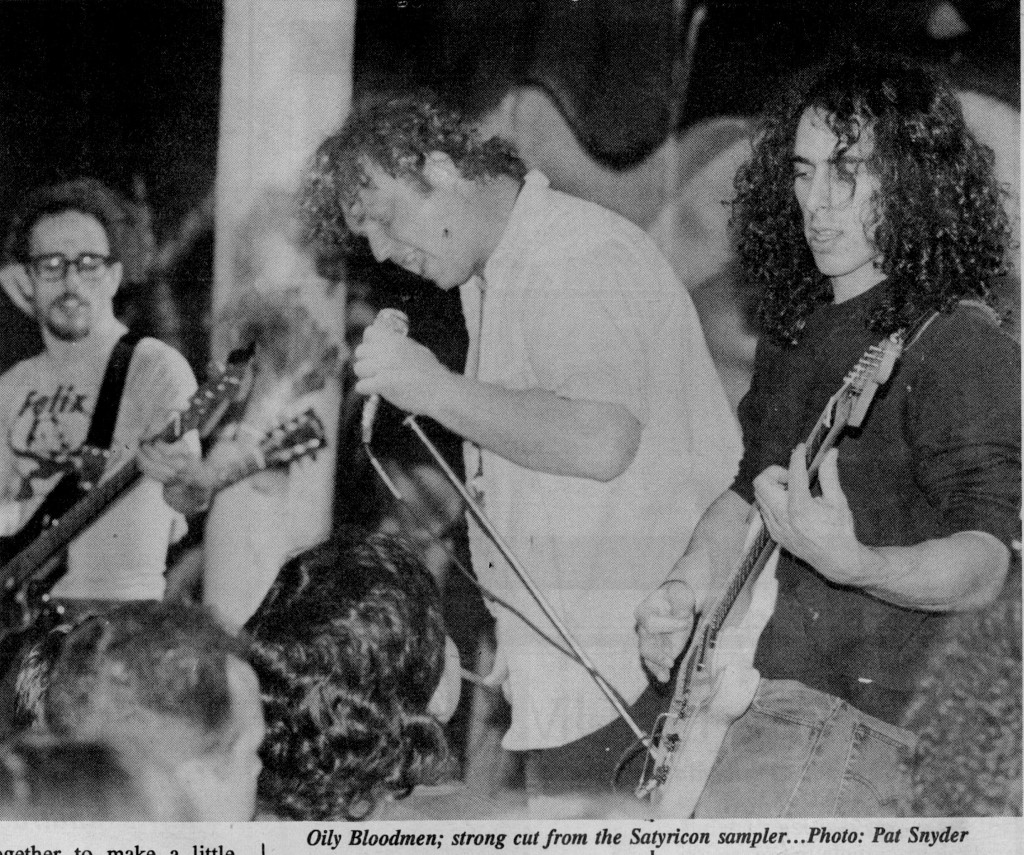 “Sugar, Option Sugar” by Oily Bloodmen features Rich Rosemus doing his best Jim Morrison schtick. A hot cut. Blade sharp. And the Jackals’ uproarious ‘‘I Hate the Rich” is a positive classic, echoing Mojo Nixon, perhaps; although with decidedly more rancor and spleen than our beloved Moj can usually muster.

The funky solid white rap of Sweaty Nipples sounds clean and exacting, breaking into a series of rhythmic departures through the middle section. Maybe the Nips sound like Living Color meeting Redd Kross on this cut.

Dharma Bums’ “E” is lyrically incomprehensible in the REM fashion, but easily could have been placed on Bliss. The tune crunches nicely, with Eric Louvre’s jangling guitars propelling the proceedings. An effective way of blasting into side two.The moaning wail of Greg Sage’s guitar, like a mourning whale, on “What Became of Us” makes of this album a collector’s item. Sage does not disappoint. producing a slow, sad song that cries real tears.

And “Fairless Square” by Indigo Zeros chimes droogily, not unlike the Beatles‘ “I Want You (She’s So Heavy)” with maybe U2‘s Bono fronting the vocal. The ominous lyrics ring of child abuse, and a desire to break that sick chain. lt‘s a little odd to hear the initial strains of Killing Fields‘ entry sounding slightly funky, but they get out of that soon enough, and into their more familiar folk mode. A great deal of sincerity mixes with the highly polished lyrics, acerbic and anti-social–to distinctly etch the grayer regions of our society into song.

Then as a bonus, you get an unlisted cut, sung by the bar crew and the Dharma Bums (ostensibly)—a sarcastic version of the Satyricon jukeboxes all time most popular cut— Alien Sex Fiends’ “I walk the line between good and evil…”

What a great compilation this is! Rumors has it that the record is going to receive some distribution support. So hopefully, Satyricon can recover the funds to create a second compilation in the future. As for you, you’d better pick up a copy of this as fast as you can.

Kind of a retro sound is at play on this four-cut tape. But tight harmonies and ballsy ensemble playing rescue this work from the “oldies” category. “Holdin’ Up in the Big House” alternately combines elements of reggae and Van Morrison to sound like a slightly modified Bachman-Turner Overdrive. Yow. But the cut goes on much too long.

“Feelin’ the Impulse“ continues the mood—Soul Patch is not a heavy band, focusing on feel and groove. “Road Underfoot” continues in the same mode. As does the ﬁnal cut. “Sweet Thang.”

Overall, Soul Patch shows a lot of promise, instrumentally. They can funk it up pretty well. But vocally, bassist J. Patrick Dooney doesn’t cut it, his voice sounding thin and disinvolved. The songs themselves are little more than points of departure for overcxtcnded jams. Once again, this may work well in the clubs—but on record the stuff tends to lie there.

If Soul Patch can concentrate on writing better songs, and executing them with more gusto and panache, vocally—l think they could mature into a very good band. Time will tell.

Recorded live, most of the cuts here suffer from rather poor sound quality. In no way does this diminish the quality of playing going on here. The Cookers move from up tempo R&B on “Say Bossman” to the more straight ahead 12/8 of “Real Ugly Woman” with expertise acquired through years of trials. Dennis Elmer’s laid back drumming compliments Bill Coones’ gently walking bass lines, leaving plenty of sonic room for guitarist Brad Rapp.

The Cooker seem to be destined to remain on the second line of this city’s enormous blues roster. They can outplay 95% of their counterparts, but lack, perhaps, the charisma that makes some of the others more successful. Also the Cookers seem more adventurous than most of the members of their blues brotherhood. This could scare the folks out there who like the blues because all the other yuppies at work like the blues. It’s safe. It’s ethnic. But it’s not safe the way the Jelly Roll Cookers play the blues. Good luck, guys.

This review just goes to show you the power of persistence. I think this recording has been out two or three years now, but I’ve never reviewed it. Through endless cajoling and rankling, Kearsey has managed to, guilt trip me into listening to his well-recorded, well-played collection of soundtracks. Brisk guitars and sensuous flutes propel “Voyage Northwest” with calming verve. Not a whole lot of melody here, but a very sensual mood is created between the Irish Harp and the acoustic guitar.

“Listen to the River” glistens and sparkles-through an interesting piano arpeggio generated by David Poulshock. Again, the mood here is everything. Though pretty chord changes and subtle orchestral maneuverings make for most pleasing sounds, one waits for a real melody to appear in the midst of the elaborate production. Here, however, that does not come to fruition.

lt‘s the curse of the “New Age” genre. The emphasis of mood over melody greatly undermines the effect achieved through careful arrangement. The sensation of melodic stasis pervades. “The Eyes of Kaoul” drifts more in the direction of free-form jazz, escaping the New Age blahs, somewhat. And the title cut opens with a whining drone that promises an adventure through curious musical territory. To a certain extent, this mission is accomplished through the stalwart violin solos of Billy Oskey.

Silverthaw was recorded at Desitrek Studios, so expertly you can hear a pin drop. The musicians used are of the highest order, as eclectic as you wanna get. And J. Michael Kearsey proves that he has the expansiveness of vision to create these extended aural pastiches. If he will concentrate on developing satisfying melody lines to suit the fantastic musical moods he creates, I think Kearsey could become one of the biggest in New Age Music. Otherwise, this is good music to watch your car freeze up by. 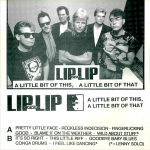 Lip to Lip has evolved their own curious sound. Leader Lenny Rancher has combined elements of Bob Marley, Paul McCartney and Chicago to make for an original stance.

“lt’s So Right” is a poppy little treat, obsessed with the old in and out. ﬁne stuttering horns punctuate the seductive litany Lenny develops. And Lenny cuts loose with another smoldering guitar solo here, as well.

Lip to Lip has grown by leaps and bounds over the past year. By far Lenny’s most successful vehicle. The band is tight, with solid arrangements. There is plenty of musical space here. This recording serves as a chronicle to the growth the band has achieved. But now is the time for Lip to Lip to look ahead. What does Lenny want to say with this magniﬁcent package he has assembled.

While the pop sensibilities of the songs are properly in place, it would be nice to hear Lenny push himself as a songwriter. His reliance on reggae and “between the sheets,” while certainly well placed, becomes ponderous through the course of an album-length project. By following the lead he establishes on “Goodbye Baby Blues,” a hyperactive rockabilly mutation, Lenny will afford himself the opportunity to widen not only his own musical perspective-but that of his audience as well.