Well, here it is May already—time for that yearly musical cattle call: The Mayors Ball. It may be time to chuck the name of the event, perhaps call it the “Musician’s Ball,” since the mayor hasn‘t exactly been bending over backwards to protect the civil rights of the participants; and about all the singing I’ve ever heard that guy do is to belch an occasional “whoop whoop” for no apparent reason. Let’s give the ball to the ballers, give the money to charity and call the spectacle what it is: The Portland Musician’s Ball. Let the Mayor have the Rose Festival or something. Who cares? 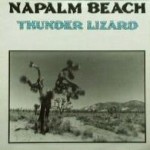 Here’s the first product for the Beach to be recorded on the Satyricon label out of Dusseldorf, Germany. As some of you know, the label was created by a German guy, who, after visiting Portland» and the club of the same name, dedicated his label to furthering in der Vaterland, the musical spirit he heard here. Thunder Lizard is Satyricon Records’ (Dusseldorf) first local release to bypass its Flying Heart label connection to Portland. Which sound like some kind of avaricious putsch to me, but what do I know? OK, so anyway this record was recorded at Skyline Studio in Dusseldorf, by German fellas to German standards. In that regard the overall sound is a little thin and austere, though my own Nationalistic bias may be affecting my aural judgment to some extent, who can say?

Thus begins the record, with the eponymous and schizophrenic instrumental “Thunder Lizard.” The tune alternates between the lumbering, ponderous power chords of Chris Newman’s guitar–with the skittering skate of the expositional segments. Chris’s guitar work in these sections is highly focused and very blues oriented. 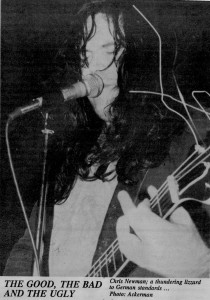 “Open Windows” is a solid four- chord tune, with a jumping, lurching beat. The lyrics are grim. The coincidence has been suggested Regarding the timely nature of this song—considering the fact that it was recorded only a month before the unfortunate death of Eric Clapton’s young son. “Hey mama mama/don’t you know/ your little boy jumped out the window.” Plainly, Chris’s lyric confronts a much bigger issue than an accidental fall. “I’m not very happy, you can see it in my eyes/ But I know the answer isn’t suicide.” Yet he goes from there to a higher plateau—“l’ve got to stop crying now, I’m so bored/ close the open window, walk through the open door”—to a point of affirmation, admirable in its poignant balance of stark polemic and elegantly simple imagery.

The catlike strut of “On the Game“ betrays a streetwalking purr of a chorus Now you’re on the game! It can’t be the same! I can’t share you with a customer.” The torment circulating through Chris’s anguished cries between the verses offers a window to the raw sorrow of life, in an all too human soap opera.

Bassist Dave Dillinger and drummer Sam Henry propel “Moonchild” with tomahawk thuds of undulating quadruplets—heavy accents on beat one. Chris’s mostly spoken vocal is reminiscent of Peter Gabriel-as is the overall effect of the song. Sam slams the tune home with a fine tom~tom war dance.

“All Out Of Time“ is a hard-charging number that I swear I’ve heard elsewhere among Napalm recordings. But maybe I’m wrong.

Upon hearing Thunder Lizard, a friend remarked that the music sounded a lot like their last album. With the exception of the mentioned cuts, I guess I’d have to agree. What Napalm gains in water sheen majesty on this recording, they lose in burning intensity. Somehow the pristine precision the band exhibits here adds uncomfortable distance between the listener and the band.

The musical holding pattern was inevitable, considering the band recorded the record so quickly after the groundbreaking release of Fire and Water last summer. There is little doubt that Chris can play the guitar. He does so masterfully, throughout. And Sam and Dave have never sounded tighter, or bigger. But something is missing here. I think it’s home. Home is where the heart is, and with Napalm Beach, the big fiery ﬂame that is the heart of this band will always burn brightest at home. 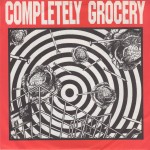 The Rocket calls theirs “that stumbling block of a name.” Really now, I don’t think the Rocket has ever seen these guys play! Their name is totally appropriate. It’s their image in a nutshell. And you have to hand it to the band for that. They do have an image and that’s nine points of rock law. Bingo. 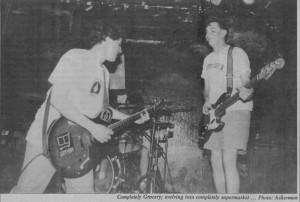 What we get here are two infectious slices of the Grocery pie, as different as apple and cherry. And listening to these recordings, it’s sort of understandable that the Rocket could get the wrong impression. But what’s in a name? “Girlhead World” is REM meets Grateful Dead Milkmen, propelled by guitarist Ted Thieman’s chunky riffs and John Mitchell’s curiously effective one note vocal. But look out for the key change near the end. That full step up might trip you. Jeff Cavanaugh’s drums and Ted Smith’s bass pin the corners down nicely on this pleasant little drinking ditty.

“Punk Head” is a fun, funk/rap foray with a great phoned-in vocal duet in the middle part. Thieman‘s cheesy soul-guitar riffing is right on the money all the way through. The rap is mostly unintelligible–maybe dangerous in a harmless kind of way. It’s hard to say.

It’s possible, if the band can somehow rein a harness on their bewildering energetic glee long enough to put together an album’s worth of material—capable of being reproduced in live situations, that, with proper guidance and a little bit of luck, these guys could evolve into Completely Supermarket, or possibly even Completely Mall. Just the same, the band would be a sweet, weird kind of crazy fun. Like a marshmallow bobbing in hot whiskey, or beer-ﬂavored cotton candy. Completely something like that. 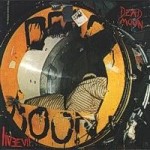 Perhaps some of you were lucky enough to have caught noted local soundman Tom Robinson when he was on “Northwest Music” on‘ KBOO, one recent Sunday night. Tom had live recordings of some of he earliest punk and new wave shows to be staged in Portland—circa 1978-79. The music was raw, energetic and compelling. Standing out among those classic recordings was the work of King Bee and bandleader Fred Cole. Cole didn’t sound a whole lot different then than he does now. Even then, the pinched, high-pitched wail, and the searingly reckless guitar abandon. On a song called (I think) “Zipgun”

Fred proved that he always was one of the greats of the local music scene. And one of the great untapped resources in all of rock music, anywhere. His sense of frenetic energy and hyperkinetic transcendancy have always shone through his work.

Now, some thirteen years after those recordings, come a 28-song, 95-minute disc, recorded live in Stuttgart, Germany last August. Sometimes I think we locals laugh when a band mentions successful gigs in Europe. But this recording serves to illustrate just what a successful gig in Europe sounds like. It sounds like a crowd attending a Led Zeppelin gig around 1970: mayhem. And Dead Moon, in this instance, give the crowd a lot to scream about. From the first cut, “Dead Moon Night,” to the last, “Walking On My Grave,“ and the reprise of “Grave Yard,” Dead Moon simply burn.

Breakneck tempos, held together by Andrew Loomis’ Jack Daniels solid drums and Toody Cole’s heart-racing bass lines, Fred launches through some of the most inﬂamed sets to be recorded since the late great sixties—mostly compositions from their own necrophilic oeuvre, ﬁlled out by a few choice covers.

You can tell Robert Plant and Arthur Lee (of the long-departed great West Coast band Love) were big inﬂuences on Fred during his formative years and maybe John Fogerty, too.  But what you hear is a rock and roll master cutting through a libretto littered with desperation and dogged determination. In his songs Fred seems to be lamenting the passage of his youth, and dreams unfulﬁlled. But I’m not sure if Fred even realized his own accomplishments. For on this recording, for the whole world to hear, is the sound of a man torn open—the pulsing ﬁber of his soul twitching in the spotlight: hot wired into a 220-volt electrical outlet.

This disc is released through the German Music Maniac Records label. Score another major coup for the Germans. This is an underground classic. A must have for any faithful follower of the Portland underground. For here is a recording of one of its seminal founding fathers. They run through about every song the band knows with panache and balls. And the Germans eat it up. I guess you would too if there was a place in this town where you felt safe to react, to really listen and react. Maybe someday that will come to pass. And when it does, Fred Cole and Dead Moon (like Chris Newman and Napalm Beach) will get the kind of recognition and adulation here in Portland that they so easily receive in other parts of the world.

You owe it to yourself to acquire this recording. 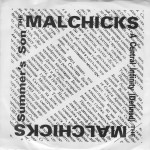 Apparently these Tacomans never heard of Billy and Lenny Rancher’s Portland band of the same name from the late 70’s. That band lived up to its bad boy name. This one doesn’t. But they are a good band, all the same.

“A Central lnfinity . . .” covers more highly charged territory, sounding not unlike an acoustic tinged Big Country-with martial drum beats and droning electric bagpipe guitar. One also recalls U- 2’s Boy—with maybe just a (thankful) touch of the Stones’ “Street Fighting Man.” The band proves it can rock, in the stretches where it allows itself to do so. The Malchicks show possibility. Supposedly they will make the trek to Rainyville in the coming months, and would be deserving of a look if they showed up. But about that “stumbling block” of a name…

Singer/songwriter/guitarist Robert Brown has ridden the rides of the local scene since he blew into town with a band called Nimble Darts in the early 80’s. Because that was a pretty damn good band, it’s unfortunate that it is now best remembered as the one that gave Dan Reed his first big break. But since the break up of ND, Robert has popped up all too infrequently to deliver his cool, sharp-edged, steely rock.

Black Rodeo is the name of the present incarnation. Whatever the case, Robert gets right to it in “Attitudes,” a song that sounds like Wang Chung, but feels like Tonio K. Rocked out funky reggae in feel, this slightly anti-social diatribe serves as a nice setting for some knockout Satriani-like pyrotechnics from the neck of Robert’s guitar.

“No One to Blame“ features some pleasant synth washes, a fearsome beat: accents on one and three, and a kinda Sting-y like high vocal. And again Robert cuts loose with a fine solo. He composes elegant guitar guns, interspersed with pregnant bends and stutters.

“No Tears” sounds dated and morbidly imitative of Ghost in the Machine period Police. Dump the arrangement. Black Rodeo are better musicians than the Police. l’d say expand on that be-bop/ hyper-reggae tag at the end of the tune. Now that’s progressive! What do you think?

“Down the Line” is a big-wheeled, monster pick-up truck of a song—a thoroughly modern sound. No trace of Sting anywhere. Thank God. Jeez, one of that guy is way more than plenty, thank you very much.

Anyway, if Robert Brown and Black Rodeo can continue to produce material the caliber of “Down the Line,” I predict big things for the band. It is by far the best compliment of musicians around which Robert has ever surrounded himself. He should use their considerable talents to his best advantage.