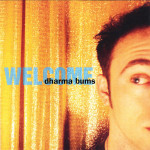 There are those very rare occurrences in which a band takes on a life of its own that is decidedly apart from the lives of its constituents. At that point, a band breathes. It eats and sleeps. A band is lazy. A band is contemplative. A band is aggressive. Well-adjusted band members will seize upon these moods that a band undergoes—they will allow themselves to be led by the sensitivities of the whole. The Dharma Bums have always been just such a band—a living, breathing organism, stronger than its component parts.

As a band grows from child to adult, certain stages in the maturation process can be isolated and inspected. As a band, the Dharma Bums are approaching the state that Robert Bly might call “Real Man.”

With Welcome we find the Bums thinking and speaking as adults, having put away their childish things. There are no stunning realizations here, but just the slow certainty that comes from being an adult, and thinking like one—the wisdom that comes from mending a broken heart or a broken psyche.

Anyone who caught the Burns’ inspired “acoustic” show at Belmont’s last month can attest to the fact that what they saw was not an aberrant white elephant gig, but a true preview of the sound to be heard on this recording. For while there are still many moments of fire and bombast to be found on Welcome, the intensity here seems to be emanating from the souls of the participants rather than as a random burn—off of hyperactive energy. As they proved at that show (and on this disc), the Dharrna Burns still burn— even when they burn acoustically, they still burn.

A good case in point is the first cut “Light in You.” The Bums retain their ability to concoct a tough rocking tune. Highlighted by a nice modal lead guitar figure, presented by Eric Louvre, the song has plenty of energy. But lead singer Jeremy Wilson seems restrained—controlled, as if the straightforward message he purveys in the lyrics is enough. There is no need for vocal pyrotechnics to put the point across. The energy springs from within the song—with no necessity in overlaying external emotional energy in order to make the song succeed. It succeeds on its own.

Perhaps Eric’s riff on “First time/Last Time” owes a debt of attitude to REM’s “Stand’ but if that is true, then another debt is owed to Buck Dharma of Blue Oyster Cult for the riff from “Don’t Fear the Reaper.” The song swings from tough through the verses to a country twang thang in the choruses. But it’s that familiar riff of Louvre’s upon which the song hinges. 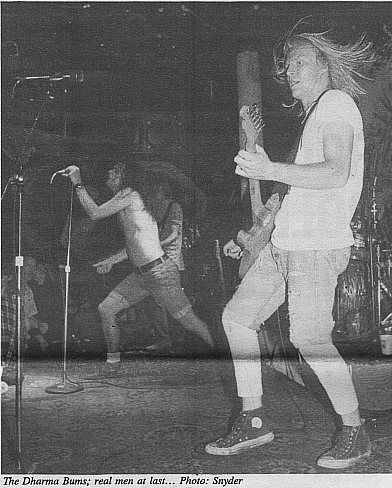 No such debts are owed for ”Good Advice,” another strong rocker, upon which Louvre’s angular riff is pinioned. Thus far into the recording, it would seem to be another Bums recording. Smoother, tighter, fuller than its predecessors—more fully crystalized perhaps, but another Bums recording all the same. Though it is precisely here, where the band introduces new elements into their repertoire.

“Incestuous” begins with a simple bass figure by Jim Talstra, over which Louvre weaves a fine chord tapestry on guitar. The two instruments interplay contrapuntally for awhile, finally resolving in unison, at which time Jeremy enters. What is new here is that the band does not seem self-conscious about performing this poignant ballad. Similarly, ”A Push Me Pull Me” does not retreat from its low-key stance. The band has reached a level of maturity where they do for a song what the song requires. “A Push Me Pull Me” could have easily been another signature fiery rocker—the material is there within the song. But wisely, the Burns recognized that that was not the treatment for which the song was asking.

Anyway, they had “Porch Song” upon which to vent their spleen. For this is a number where the Bums come closer than ever before to reproducing the Doors circa Morrison Hotel or LA. Woman. Jeremy’s hoarse wail captures Jim Morrison’s resonant exhortations without mutating them. John Moen’s drumming is compact and solid here, tasteful and evocative throughout.

Probably, the sterling performance is “Wreck Around Town,” a vibrant, hectic number—strung along by Eric’s beefy guitar (highly Keith Richards informed on the interjections between the breaks). The song faintly resembles “Far From Gone” from Bliss, but is harder and more to the point. The handclaps on the fade knock me out. A real tasty touch.

But if you want an idea of where the Bums seem to be going, check out the final cut, ‘Aces.” The song jumps along at a jaunty pace. All right enough. But there is an underlying agitation threaded through the song. At every turn it feels as if the song is going to explode, but it never does. In younger days, the Burns would have had this song breathing fire by its completion. Here, they allow the expectation of that explosion to propel the tune: a characteristic choice for understatement over bombast.

The Dharma Bums have afforded themselves a far richer palette from which to draw color and nuance. Where, in the past, their recordings seemed monochromatic, Welcome bursts with color. In many ways, Welcome reminds me of the Beatles’ Rubber Soul for it was that album too that exposed the Beatles as being more than mere teen heart throbs. As that album was a true turning point for the Beatles, Welcome, too, will be recalled as a turning point for the Dharma Bums—an album which finds the band all grown up and ready to contend with grown-up concerns. For, today, the Dharma Bums are real men.