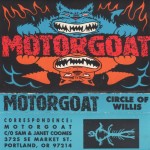 Here is a band with which to be reckoned. A grunge band with serious chops and the ability to present them in a unique way. They are literate and literary, cynical and guileless. A band with a future.

And though this tape has been around for some time, the band has only been on live circuit for a scant month—garnering much deserved media attention in that short time. From that perspective the music contained here is more than pertinent.

Guitarist/vocalist Sam Coomes and drummer Janet Coomes, husband and wife, engineered this ﬁve-song project with a lot of love and care. The result is a sonically thick (yet articulate) melange that is a giant step ahead of whatever its sources might be.

There are no clinkers or clunkers here. Each cut is sculpted indelibly. “One Eyed Man” combines a familiar bassline with a snarling, twisting guitar ﬁgure and Keith Moon-like skittering drums to serve as the backdrop for the acerbic ingenuousness of lines like “You want the diamonds, but you don’t dig the mine/ You want to move ahead, but won’t leave anything behind/ If you don’t speak the language then you can‘t read the sing/a knuckle sandwich and a slice of humble pie/I’m a one-eyed man in the city of the blind.” This is sung with a sly, deceptively off-hand vocal. The solo is a confabulation of industrial noises at varying degrees of toxicity.

“Nine Months“ is an unorthodox look at the biological wonders of pregnancy, haunted by a ghostly keyboard-like ﬁgure in the middle. Here again touches of brilliance (the screechingly eccentric backward ﬁsh guitar solo) set this stuff apart from the mundanities of common sludge-rock.

But check out the stunning “Imagine”-ish sentiment of “On My Planet“ and juxtapose that with the Hendrix informed sensibilities of the accompaniment. In some ways this stuff is so classically retro, it rivals the antics of XTC’s Dukes of Stratosphere. But the stuttering, time traveling snakebitten twang of the bass-string guitar solo, elevates the elements to a totally current status, while hearkening to roots like Led Zep, the Who, Jethro Tull, and the Yardbirds in the course of the 32 bars that follow. It’s an amazing feat. The spaghetti western ending adds just the right touch.

The context of “Above and Below” has been fairly clearly outlined elsewhere. But what was not fully ﬂeshed out is the lightning Pagey rilf that lights the spark beneath the cut, and the slashing solos that pin it to the wall. Sam Coomes knows every riff in the book and he throws them at you machine-gun, ﬁring thirty rounds a second.

The cut ﬁnally resolves into a bronto dirge intro to “Volcanobutt,” a simplistic diatribe against narrow-mindedness—spiced with the curious couplet: “Love can’t be analyzed/And love is all that keeps us from being devils.”

Motorgoat might be the new power trio on the block, but they deserve very close inspection by anyone remotely concerned with the “Portland Sound.” I predict that in the next six months the whole world will be concemed with the “Portland Sound” and bands like Motorgoat and Hazel and Jolly Mon and Heatmiser will be the ones to clearly deﬁne that sound. Then a few bands will get signed and the world will go away. 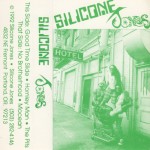 Here’s a funky rap band that’s been generating waves in some circles around town. The funk here is tightly drawn between bassist Matt Polelle, drummer Dug Vogel and guitarist Marl: Anderson. Vocalist John “JC” Connell delivers the raportune pompitous to the largess of luv on “Good Time Slide“ and “Hornley Man” a fairly gender speciﬁc ode to onanism. The radiant message here is one of desperation in an effort to requite the most ageless of desires. Perhaps not the newest, but certainly the most unrelentingly timeless among rock age lyric themes.

JC straps on the bass (the instrument he played in a former band Tiki Head) to duet with Polelle on “The Pits,” a tune that vmrks best among the ﬁve presented—with a discernible chops, and a more universal point. Likewise, “Brotherhood” melodically similar to David Essex‘ “Rock On,” bemoans the disintegration of tribal values. “Mocean” skirts reggae/ska/funk turf while treading lyrical waters clearly deﬁned in the beginning.

Silicone Jones exhibit many bright spots, though having much of anything to say would not be included among them. lnstrumentally, the band is tight and polished. Vocally, JC couldn’t carry a tune in a bag to the backyard to bury it. But he delivers his manifestoes with a personable air of unabated puerile exegesis and covetous coquetishness. If that should be in the arena of your affinity then you’re well aimed in the direction of Silicone Jones.

Boogie Patrol Express are a Eugene—based nine-piece outﬁt, replete with horns and a unique sound that’s hard to deﬁne. Vocalist Hilary Price has a well-honed, distinctive voice that gives this Daddies-like confunkshun a decided ﬂavor of its own. “Transcendental Overdrive” exhibits these qualities admirably. There is an easy sweetness to Price’s voice that belies the training that breathes just beneath it. On “Better That You Don’t Know” Price is joined by co-vocalist lans lngber in an overtly jazzy/funky swang thang that recalls Sergio Mendez and Brazil ’66.

“Look At Me” funks it up pretty good, with a scorching tempo and some hot solos—especially that of bassist Jeremy Gibons. Price has a big, ballsy voice not unlike that of Tina Purdy of Naked Lunch/Pheromones notoriety. “Crossdressing Can Be a Drag“ is an odd mixture of Sly Stone and Dan Hicks and the Hot Licks, with crazy ska-laced horns scuttling in and around.

Boogie Patrol Express are so mod their shoes squeak. Their sound is an intoxicating cotton candy — that in reality is mostly just sugar and air. But when they want to range into some sleazy funk, this band can burn. Less of the former and more of the latter would be an addictive concoction indeed.

The Clergy present a jagged-edged grunge highlighted by the hard-charging vocals of Christi Simonatti. On “Purity” her voice ﬂoats ominously above the dark clouds of guitar fog emitted by Leon Goodenough. A strong memorable chorus propels the song with a certain operatic angst one ﬁnds in the work of Throwing Pretenders and M-99. Simonatti can belt it like Heidi while purring—like Chrissie.

“Free My Skin” is a rousing anthem that stampedes unremittingly. Murky guitars crash and clang in tight, open power chords — ringing deﬁantly through the heroic chorus. Three minutes of transcendent bliss. The Clergy are another band that are not as well-known as they probably should be. They are energetic, lyrical and melodic for the limitations of their chosen musical genre; and certainly they are deserving of closer inspection.

Moody, dark, audio noir. Justin Stark delivers his tales with a wavering rusty voice like that of Neil Young. “Touch” quakes with tremolo guitar and edgy schizophrenia. “Juggler” (which appears on puddleSTOMP — the stunning local compilation CD now available on the streets at last) continues tracing the razor’s edge of blood and emotion with the chilling account of the predilections of a snake-hearted killer—delivered in a sinister Lou Reedish monotone. The tension builds within the song to a heightened degree, until suddenly snapping to a violent halt.

“Tumble” stumbles as if on broken glass, beefy guitar riff generates the steam over the shufle rhythm—another story of suburban desolation and moral asphyxiation. “Twirl” swirls recklessly in a drunken swaggering dance of frustrated circles. “Itch” twitches with a yearning tinge, a burning twinge at the door of the psyche. A hoedown for Hollow Men.

No, Justin can’t really carry a tune either. But he invests his material with enough music and Norman Bates zeal, that his lack of a strong vocal instrument serves to solidify the frenetic numbness that is at its core. 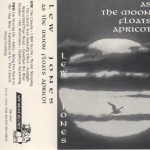 With the help of Dan Crommie of Group Du Jour, Lew Jones has recorded a piquant instrumental cassette of real charm.

Armed only with a guitar—with occasional keyboard coloration by Crommie, Jones mines the long-deserted ﬁeld ﬁrst pioneered by John Fahey and Leo Kottke: folk guitar. In the past ten years there have been any number of New Age guitarists whom have recorded modal monuments to the pastoral jazz etchings ﬁrst initiated by Ralph Towner. But there are very few who are combining the traditional elements of blues, folk and classical guitar. That is what Jones does here with surprisingly positive results. The fourteen pieces contained here mix those elements in new and interesting conﬁgurations: each a startlingly recombination.

While this recording will not appeal to those requiring blood upon their sonic breakfast, others will ﬁnd this to be just the tape for those thoughtful Sunday mornings when contemplation takes precedence over stimulation.