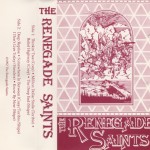 The Saints are a lively Eugene-based band whose roots are closely aligned with those of the Grateful Dead, without being of an entirely imitative nature. It’s a tribal kinda thing they purvey—thoughtful, yet partyish in a Birkenstock, lovebead, tie-dye, incense motif.

“Thinkin’ Tree” is a highly charged, raspy-edged reverential ballad that features some nice interplay between guitarists John Shipe and Alan Toribio and a solid solo on the organ by Mike Walker. Innovative? Well no, but certainly infectious in an Allman Brothers sort of way.

“Million Dollar Smile” walks the line between the Dead and the Allmans’ funky Southern sound, with raucous piano chunks and high- string snapping rhythm guitar. The skipping Jerry-like solo helps to congeal the atmosphere, which, lyrically, typiﬁes one of social observation and commentary. A jammin’ proposition.

‘Relief Highway‘ features a twin guitar sound directly antecedent to the Allmans’, while vocally recalling Marshall Tucker. Fifteen years ago these guys would have been local gods along with Hurrman Burrman and Triggers Revenge.

“Somewhere in Between” is a raucous number, replete with slide guitar/organ interplay that embodies a certain REM feel not elsewhere detectable in the proceedings. And the Saints‘ version of Hendrix‘ “I Don‘t Live Today” owes more to Electric Flag than Jirni, with an organ-based sound the Experience never considered.

“Know By Now” treads waters that Little Women often swim—that of the poignant, introspective ballad rooted in a country Americana sound. The Renegade Saints don’t exactly mine new ground as a band, this sound is tried and true and twenty years old. But they perform faithfully and with faith, it is readily apparent that their music is important to them. They have conviction. And fans of the genre will truly appreciate what this band has to offer. 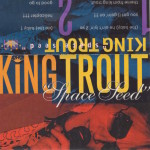 The Troutmeisters have been grooving their 70’s retro-disco thang for about a year now, pretty much exclusively on the Eastside. It is the stalwart stage work of lead singer ‘The Divine Baby” David Gill that sets the band apart. His nifty stage personae instantly recalls Rod Stewart (in his prime)—with severe George Clinton/Parliament overtones.

This recording is an excellent representation of that band. insistent dance-funk, with not a whole lot of intellectuality, is the theme.  “He Ain’t Lyin” is one of those songs about how much better this guy is than anybody else in a James Brown sort of way—yow! Gill sets the mood while guitarist John St. Chavigny and bassist John Mclsaac funk on furiously with drummer Kenny Pain. Gill reminds me of David Lee Roth here though I’m not entirely sure why that is.

“You Got It Goin‘ On” is prime ‘70s funk delivered straight faced—courting the proposition of “the dirty deed” and “gittin’ it on” and of course “getting’ down” which are functional euphemisms interactive with the sex act. Lest you think the milieu to be shallow, one need only reﬂect upon the polyester laden BeeGees infested culture that was the ‘70s, which were of course the Brady hunched windmills of our formative years. So apparently these code phrases, ritualized through repetition, are psychosocial elements of our lizard libidos.

Either that or it’s just good dance music. Shake yer booties. “Theme from King Trout” is a high strutting piece, much more closely aligned with the rap of the Chili Peppers and a deﬁnite clue as to where this band comes from live. St. Chavigny’s guitars are chunky and crunchy expertly captured by engineer Rudy Battjes. Gill sounds cocky and raunchy. Live, he adds the elements of humor and Showmanship to the soup.

“Do the Baby” is another top-notch dance tune, perfect for a party situation. High proﬁle funk delivered with state-of-the-art fidelity. “Helicopter” is one of those rare confections that is equivalent to aural cotton candy—like Hot Chocolate‘s “You Sexy Thing,” there is nothing to really chew on here, other than the incessant hook. But the hook is everything when your name is King Trout. Here, Pain‘s drums propel the tune, which would seem to be a purported exaltation as to the propensity and maintenance of some sort of apparatus. St. Chavigny fairly rips in the interim guitar solo.

“Good to Go” pretty much continues in the same vein. If this stuff doesn’t start your party—it probably isn’t going to happen. This is mingle music to the max. Masters’ Thesis as to functional interactions between primates? Perhaps. but only on the most basic of levels. For this is a band which promotes celebration over cerebration. And if shaking yer butt is akin to Hamlet, King Trout is Shakespeare. 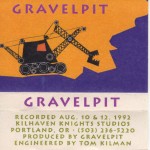 As you might expect, given their moniker, Gravelpit grind out a gritty grungy rock. Driven by two murky guitars, ‘Never’ works around a recycled Zep riff, while being propelled by Johnny Huck on bass. Huck has been in numerous bands since leaving the Corps a couple of years ago—usually they’re a little funkier than this. But his playing ﬁts well all the same. 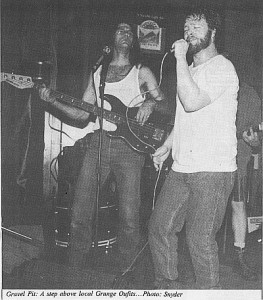 “Dreams” recalls the four-chord work of Bob Mould in the Husker Du days. Crunchy and motile. “Fair Weather” recycles that Zep riff again, this song features a stronger chorus however. I could hear Elvis Presley singing this song in some alternative universe. “Grind” slashes more than grinds, hammering on two chords incessantly through the verses, while relying on a tough guitar ﬁgure through the choruses. A stronger chorus could help this song, which reminds me of the Miracle Workers in some intangible way.

“President” is a double-time goosestep political statement about power and corruption that zips by in two minutes, which would be about the maximum amount of time anyone could spend reflecting upon that particular station.  “Utopia” ﬁnally steps back slightly from the sturm und drang approach, heading more toward a dinosaur type of arrangement favored by Black Sabbath. Melodically, the song follows the chords and doesn’t offer a whole lot to work with. “Nothin‘ to Lose” is a power chord epic to outlaw status rebellion type of activity. Not exactly new turf, but these guys do add a little something new to the mix.

Vocalist Steve Wilkinson has a good instrument, though as yet there is nothing to set him apart—especially from other throat graters of his ilk. Perhaps in time. “Run Away” comes in with a different approach, more restrained in an overdriven kind of way. The vocal here sounds different than on other cuts. I think these guys are trying for a Pearl Jammish kind of blues inﬂuence. They are partly successful here. “Got Caught‘  returns to the original formula.

Gravelpit are a fairly tight live piece, a step above most local grunge outﬁts in that they construct songs as much as mood pieces. Concentration upon detail in the construction of these songs, stronger choruses, could serve Gravelpit well.

The Ultronz are the gods of the Hood River wind surﬁng scene. Occasionally the band will break away from their duties as Funmasters to come to Portland to promote their brand of goodtime mayhem.

“Radioactivity” is a skanky little number featuring the guitars and vox of Jeff Smith and Eugene Gray, the sax of Mike Ehlan, and a little message about “radioactivity not being good for the birds and bees.“ Oh really? Thank you Ultronz for that public service message. “Shark” is a crunchy rocker with a skipping beat that kind of reminds me of the Dharma Bums though I’m not exactly sure why. Cool guitar ﬁgures are the glue here. “Searchin” has an instantly familiar feel and strong chorus to keep interest alive. The loosey goosey blues of “H.R.P.D.” tells a story of a big shot small town cop causing trouble for our boys as they try to get out of town.

“Total Habitat‘ is reminiscent of the more spooky work of Danny Elfman with Oingo Boingo without sounding derivative. The wah-wah guitars give the tune a sixties metal sound in the tumarounds. “Smokey” is kind of a send up of the Classics lV’s “Spooky” if any of you remember that from your childhoods, or genetic memories. “Keep ‘er Down” is a sneaky little number, featuring some easy guitar work and Smith’s readily identiﬁable rock singing voice. 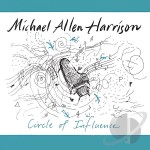 Thoughtful, pretty, passive music from Portland’s own King of the Mystic Chord. ‘New Beginnings” rattles on sensitively in a Keith Jarrett mode with pleasing ﬁligrees and dainty arpeggios. Cotton candy. “City of Roses” is yawningly unannoying, and says nearly everything you can say about this burg without resorting to words. There is melody here among the elastic left hand runs—you can sing it, go ahead and try.

The title track is an atmospheric jaunt down a foggy alleyway. I think l forgot my house keys. Hey, where’s my car? Michael takes a while to get around to presenting his theme here. And when he does, it is so intangible as to be insigniﬁcant. But he plays the piano with a guarded sense of emotion, exhibiting the restraint of a monk. In fact, anymore restraint here and you could just picture Michael falling asleep right at the keyboard as he’s playing. I fell asleep listening.

ln fact that’s what “New Age” music is all about—inducing an hypnotic state akin to sleep by which one can forget all the cares of the day: such as paying off the Mercedes and getting the cellular phone installed.

Circle of Influence is well-played music by an obviously well-trained musician. But the stuff is about as satisfying as a corndog. After you wade through the cornmeal mush and the grease; there’s a big hot dog in the middle.

I keep waiting for Michael to scream out in the middle of one of these ditties  “I’ve got blisters on me ﬁngers!” although “Who took my nasal spray?” would probably be more appropriate. Hell, if he’d yell anything I’d be excited. But that’s not the point here. The point is to lull you into a complacent cloud of wistfulness. At that Michael Harrison succeeds with one hand tied behind his back. Better for sleep than three glasses of milk and nembutal.

Industrial sludge. Matt Holt’s vocals are of about one third the volume of Billy Burich’s guitar—almost like a guitar effect. “Where Are All the Children” is a long exercise in droning droogy guitar which evolves into “Psychotic Somersault” a cheery little ditty that recalls all the joy and lightheartedness of, say, Nine Inch Nails.

“Gingerbread” features a cool backwards beat provided by Matt Harris on drums. The drums themselves sound as if they are constructed out of epoxy—emitting sonorous thwacks and tubular wonks. lnteresting sound.  “Alien Highway” is a departure, somewhat, from the Smiling Man sound showing some restraint, at least initially. Sensitive ballad, this ain’t, but it‘s probably as close as these guys get. I mean I think I hear an acoustic guitar in the mix.

And “Goofy-Foot” scuttles along like a wharf rat down a manhole, with a certain “Batman” sort of ﬂair. “I Don’t Like You” is original sounding, if amelodic and anti-social—with a jazz sensibility not heard since Zappa killed the Mothers and walked on down the hall. The perfect song to play in order to keep your mom out of your room.

Smiling Man play their music with conviction and serious intent. Not exactly yer goodtime Saturday night fun and frolic types, but thought-provoking all the same.