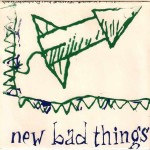 Kinda like the band next door, but with brains and a conscience, NBT are an irreverent and madcap sextet which play an understated brand of closet rock: raw, succinct, ingenuous, cynical, clever and — dare I say it? sensitive.

Oh yeah, they try to hide the sensitivity thing with a lot of self effacing humor — but that’s all camouflage for intellects whom are artfully attempting to educe reason from chaos, while deﬁning the context of their lives. Besides all that, New Bad Things are a lot of fun.

“Concrete/Knott St.” could be construed as a syllogistic eulogium to the hard bitten environs surrounding the White Eagle; either that or a minimalistic 90’s update of “Strawberry Fields Forever,” as performed by a Neo-Velvet ensemble whom elect to substitute Lars Holstrom’s lonely legato trumpet lines for John Cale‘s lonely legato cello lines. Vocalist Matthew Hattie Hein enumerates the many layers of his antipathy in a detached tone, while drummers Sticky Dave Friendly and Nayl Rhinestone march militantly underneath. Somewhere Luke Hollywood (Hollywood and Sticky Friendly backed up Roger Nusic on ’AIIo Luvvers) begins to interject a ﬁshy slide guitar ﬁgure, which comically mirrors the lilting trumpet part — in a kind of acid- etched freak out. A random Camper Van reference seems to bring everybody down pretty fast.

On the other hand, “I Suck” works in counterpoint to Big Daddy Meatstraw’s “We Suck (All the Way to the Bank)” in a pedantic rant that spirals outward from “I suck” to the state where most of the individual members of Velvet Underground suck, to “Nietzche sucks.” to “spiritualism sticks“ and “nihilism sucks”; along the road not taken for a good reason — for when thesis and antithesis collide. what does it matter? In the formless void where all is built upon a crumbling foundation of mediocrity created by Elvis, John Wayne and Nietzche — the ﬁnal appraisal (delivered in sing-song fashion ala Black Francis/Frank Black) is that we all suck ourselves: an honest and forthright assessment, if somewhat narrow in scope. Hell, sometimes we bathe ourselves. But that’s another song, on someone else’s record probably. What the New Bad Things deliver is a funny, bleak pastiche; ﬁlled with the graying colors of the pavement and the hollow fonnless contours of a BMW fender. And when I listen to this sad and witty record, over and over again — the New Bad Things give me hope for the human race, even if it’s only faint and pessimistic, and mostly banal. I don’t believe in Elvis. I don’t believe in Jesus. I just believe in me. Yoko and me. And that’s reality. The dream is over.

I really wanted to like this compilation – six or seven of the eleven bands represented are among my own Northwest favorites. But, for xome reason I don’t. For one thing, “ungrunge” is probably a poor choice of reference points. Ubergrunge perhaps. But there’s more to it than that. Maybe it’s that most of the headliners submitted lesser, alternate tracks rather than more meaty material. Maybe it’s because that of the five newer bands out. Maybe I’m just being bitchy and I should go out and get drunk and dumb and listen to the whole thing again. We’ll see about that. Oh, things start out o.k., with Black Happy’s “Paul Larson”: a hard popping tune that’s catchy and summery, maybe kind of Jesus Jonesy. And “The Place” by Jolly Mon ﬁnds the band navigating Pink Floyd “Umma Gumma” period murk with esteemed aplomb. Karl Becker’s hard-boiled guitar rilﬁng and bassist Carey Rich‘s seasick vocals make of the cut an interesting swim.

Cherry Poppin‘ Daddies‘ “The Graduate“ is a cool tune — with somejagged horn charts that remind me of a band no one remembers called the Flock. And Chris Azor’s wicked organ ritfs cast mean ripples in Steve Perry‘s stream of unconscious meanderings. A funky tight and juicy piece of rock candy. It drools.

Meanwhile, upstart Dutchboy Fingers contribute the edgy “Hey Suess.” It’s a moody, drony cut that slices through sixes and nines like butter through bolero. This band could be trouble.

But from here on out, Ungrunge seems to unhinge. Mommy’s NlNish, Peppersy “Cowboy Under Pressure” is sneeringly tough and pc as at hammer, but a somewhat pointless excuse for a fairly well executed jam. And, disappointingly, Sadhappy’s “D-Lab” is only a throwaway cut from their year old CD.

Thunderjelly’s “Clearcut Fools” almost sounds fresh and new, riding on Joel Kinney’s acoustic guitars before veering into standard rilfomatic chop chop. The 6/8 break is well navigated, but I keep thinking l’ve heard all this before. And Village Idiot are well, Village Idiot, with the tender offering “Murder Us.” Vocalist

Snake waxes poetic, while cooing a 90’s lullaby about some diliiculty or other; while the lads Blacky, Piggy and the ever fetching Away hap make merriment in the background: as that of death and smartly stride they olf into the industrial brown sunset.

Rubberneck’s “You Got Me” sounds like Geraldo fronting Pablo Cruise in a jam with Chicago. Sweaty Nipples‘ “Plaid Zipper Fish” is a vocal-less jam that could be just about any band perhaps included only for Sweaty’s name value and walletability.

Oh I don’t know. Drunk, the collection works a lot better. A few more strong cuts and a few less lame ones and I’d recommend that you get a couple of six-packs and Northwest Ungrunge and blow yer brains out. But life is full of harsh cruelties and this is but another. 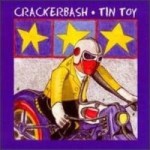 What a brilliant little bijou is this recording—as resplendent as it is brief. Clocking in at barely twenty-five minutes duration, Tin Toy begins like a flashfire in a dynamite factory exploding powerfully with five well-wrought gems. But by recording’s end, the band has changed feel entirely, glowing soft as a candle in the twilight, as tangible as faint clouds. To pull this feat off, at all, ranks Crackerbash as one of the most inventive bands around, to pull it off so well ranks them among the best. “A Song For Lon Mabon” is just as harrowing as you would hope, with a tortured scream for a chorus and memorable lines such as “You get just what you earn/ Ever seen a match burn twice?” and “Time wounds all heals I say.” “Orion” carries on at the same chainsaw pace while cutting through Meices territory — an interstellar steamroll. Beneath all the schizy activity is sort of a pretty little tune, Replacements-like perhaps. 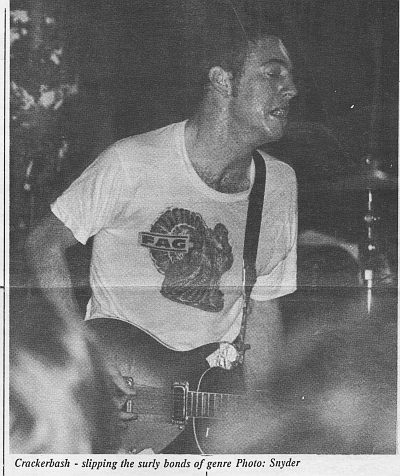 “Shoe In” continues the double- time mayhem, this time with a memorable chorus and a whiplash guitar solo in the middle that resolves over some nice bass chord arpeggios. A very cool, blade-sharp tune. “La La La” perpetuates the feel, this time kicking off with a running bass line that gives away to jagged chords and a sordid blues rilf. The song is dark and brooding, like the smudge of smog in the lungs or the claustrophobia of too many cars and too many people and no exit. A fabulous, horriﬁc vision.

“Bandages” unwinds slowly, before a tom driven beat carries the poetry away upon a ﬂoodtide. The  cracked voice chorus lends the song a sense of vulnerability and truth, overburdened with bitterness and angst. A moving piece of work, haunting and impassioned. “Hollow” starts out with two solitary discordant guitar strings working in perfect opposition. A third note, and the bass join in, then the drums — in a slow clockwork procession, as the vocal enters. The languid pace of this number is unexpected but seemingly natural.

“Hollow” starts out with two solitary discordant guitar strings working in perfect opposition. A third note and the bass join in, then the drums—in slow clockwork procession, as the vocal enters. The languid pace of this number is unexpected, but seemingly natural.

What is revealed here is that Crackerbash are a band expertly aware of dynamics. The lyrics are delivered in a whisper through most of the song, hissing like a ticking time bomb, till everything breaks loose near the end before settling like debris upon the sonic plane.