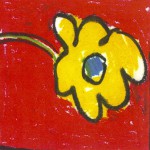 You know, it was just the other day, in a discussion with a friend, I was explaining that I was beginning to feel jaded, that nothing much of the “product” I was receiving to review was totally knocking me out. “ My friend replied, “Maybe it’s not you at all, but the product you’re receiving. “ I gave his notion some thought for a moment, then lamented— “I just wish Portland had bands that aspired to be Radiohead or something, anything but the new Wilco or REM.”

I believe it was last November that publicist Lisa Lepine sent me Dizzyfish’s four song CD. She was quite excited about the young quartet, but owing to some protracted upheavals in my real life, I was unable to listen to their album. Which is a downright shame. You see, I like to be the first to seize upon such things and Dizzyfish is precisely the band I was wishing for to my friend. They were right under my nose all along and I didn’t even know it!

Henry Curl. Remember that name. You will be tested later. No, Henry Curl is not the name of Pip’s father in Great Expectations. Henry Curl, he of the Dickensian monikker, is the name of the lead singer, guitarist and lyricist for Dizzyfish. His approach to a song, both lyrically and vocally is quite akin to that of Thom Yorke of Radiohead. Availed of a supple vocal instrument with a considerable range, Mr. Curl makes evocation an avocation. He causes the rich fiber of his superb poetry to come alive in carefully woven songs.

His accomplices, Chris Hayes on guitar and occasional mandolin, Matt Rogers (presumably not the lead guitarist for the Miracle Workers, of the early ‘80s Portland Punk scene) and drummer Jake Endicott, are not junior Radioheads. This is not a Radiohead clone band. Not in the least. But the depth in the lyrics and the intelligently well-crafted means by which they are delivered, calls to mind everything that is good and uplifting about bands such as Radiohead and  U2.

Producer Steve Sundholm adds only the barest of keyboard flourishes to Dizzyfish’s unique guitar textures. Much of what sounds like a keyboard isn’t. “Pepeto” rides in on Endicott’s insistent snare and a percolating guitar figure. With octave leaping ease, Henry Curl unfurls a cynical lyric. “Calling senators and debutantes/You better watch out you might get what you want/ I had a vicious dream/Calling holy rollers, rolling on/You better think twice when you try to con the con/I had a vicious dream…/Calling migrant souls subject to youth/You better behave and disregard the truth/ I had a vicious dream.”  A brilliant bridge, preceded by a vibrant guitar solo make of this track a winning introduction to a great new band.

Sonorous, Country inflected guitar tones set the mood for the plaintive “Reunion.”  A strong chorus pulls together lolling verses, building to a succinctly pointed bridge. A short and pretty song. But the highpoint of the set is the brilliant “Grounded (Endflight),” a foreboding number augmented by jittery clavinet and eerie, heavily reverbed guitar stabs. A galloping electric rhythm guitar pushes the syncopated drums. Concise verses, carefully constructed, swell toward a gorgeous chorus and four bars of inspired guitar solo. Another verse and a double repeat of the magnificent chorus completes the song in just under three-and-a -half minutes. A true masterpiece.

Certainly Dizzyfish will not appeal to everyone. Nothing does. But for music lovers who prefer scrupulously artful bands with something to say and the musical means to express their clever ideas, then the new band Dizzyfish has a great deal to offer you. 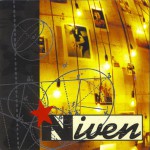 We caught our first glimpse of Niven last November with the song, “Great Big Nothing,” which they contributed to the Ramen Holiday  sampler distributed at last Fall’s North By Northwest conference by the duplicators Northwestern Inc. As was mentioned in that review, Niven is an all-star band fronted by Chris Tsefalas, a man who more than once has drunk from the corporate pool, only to come away parched— most memorably with Crow in the early ‘80s.

“Give Them What They Want” could pass for the work of Karl Wallinger in his pre-World Party days with the Water Boys. A mandolin-like acoustic guitar riff is underscored by a moaning, violinesque lead guitar figure, as Tsefalas mutters the lyrics in a haggard rasp. Perhaps veiled references to the aforementioned swim with the big fish float around in the lyrics of this song. The track from the Ramen  compilation, “Great Big Nothing,”  benefits from roiling organ passages and occasional violin interjections, as Tsefalas swings into a Pennish vocal mode.

More subdued, I’ll Miss You” plays Chris’ simple, acoustic guitar against Stricker’s standup-like bass over bongos— to great effect; as Chris whispers a bittersweet declaration. A similar simplicity inhabits “Something Wonderful.”  Here, a the mournful wail of overdriven electric guitar washes under Tsefalas’ vocals, as tension slowly builds and releases in subtle rhythmic variations. “Heart” returns to a more uptempo mood, though it is hard to grasp, exactly, what the song is about, on a lyrical level.

Bongos and a low, D-tuned acoustic guitar tinct “Caesar,” another brooding number, wherein Chris appears to be pitching battle with some non-specific adversary. “The Party,” rumbles in on galloping toms and a chunky electric guitar chord progression and describes in sketchy detail some affair where Chris feels he “can’t say too much” in the presence of some indistinctly menacing guest.

A dark mood surrounds “The End,” although, even after repeated listenings, the precise point of the drama is still unclear. A vague sense of the Doors’ song of the same name pervades within the musical atmosphere, but otherwise, no particular sense of emotion or purpose is displayed. The final song, “F Street,” is the only one that truly approaches a Rock stance, echoing the Replacements in tone and tenor.

Chris Tsefalas is availed of many musical talents, with a fine voice for the type of music he purveys with Niven. However, he fails to draw the listener into his songs on any but the most superficial of depths. His lyrics are a series of endless blind alleys and cul-de-sacs, usually arriving at no discernible destination. This is a pity, because it would seem that he has the vocals tools to do much more, if he had something of some importance to sing about.

Also, it is highly advised that any writer use the adjectives “great” and “big” in succession only once in their careers. Tsefalas best used his allotment with “Great Big Nothing.” Further usage in subsequent songs connotes a serious dereliction of duty to one’s craft; settling for what is convenient rather than what is appropriate.

With another album, Rain, in its final stages of production, we shall soon find out how Niven progress and mature. Surely there is much to recommend in this debut effort. Still, there is the hope that the band will find something concrete and invigorating about which to construct their efforts. 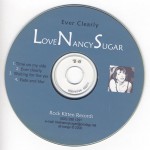 Carlos Santana’s stunning run through this year’s Grammy awards lent credence to one of the most enduring notions in show business: the resiliency of a career. A few small changes in the presentation and bam! Hip as ever and riding a wave of unparalleled success. The idea that someone could spend years and years toiling away at their craft; suddenly making a breakthrough in the eleventh hour seems as simplistic as it is far-fetched. For we all get stuck in our ruts as the years pass, trapped by our preconceptions, shackled by our limitations.

But, like Carlos Santana, Love Nancy Sugar’s Gina Noell has managed to turn a stylistic corner— in her case, nearly twenty years after her musical journey had begun. She and her producer, husband Michael Cubbon have assembled around her by far the most muscular backup band she has ever had.

Headed by fiery multi-instrumentalist James Long, whose sinewy guitar filigrees and burbling keyboard flourishes weave through every song, the band creates a Retro, ‘80s sound, akin to those purveyed by Blondie or the early Pretenders, with elements of the Eurythmics and Missing Persons thrown in. Contemporary acts such as Aimee Mann, No Doubt and Garbage also lean heavily on the works of those and other ‘80s predecessors, so the trend is not without its precedent.

The maturity in Gina’s songwriting(co-writing with various band members, primarily Long) and singing certainly measures up to the challenge such a powerful ensemble would present. For, without a doubt, this four-song EP is the most spectacular work of her career: direct, deep and intelligent— and of the highest caliber. She is accompanied by a tight, accomplished band, with chops aplenty and abundantly savvy stylistic flair. Cubbon’s years as a journeyman producer and engineer come to fruition here as well, as he forges an expansive aural environment, careful that Gina’s vocals are not lost in the mix.

The lead track, “Time On My Side,” is a solid illustration of all of the above. Long’s edgy guitar bounces off bassist Dave Schwanke’s rubbery lines and drummer Andrew Peterson’s punchy beat. Gina’s layered vocals recall Debbie Harry in her prime, an ineffable Euro feel pervading her style. Long’s soaring guitar leads and fills, as well as perfectly placed organ pads add to the energetic pace and thick production.

Long’s Larry Fast-like synth arpeggios bubble around his angular guitar interjections on the title track, as Gina launches into a tender and tough vocal, wherein she clearly delineates her world view, with an intimation of Annie Lennox creeping into her delivery in the chorus. Long again issues forth with a vibrantly flashy guitar solo in the break, after which a nice developmental passage transpires, leading to the final verse and chorus. Very nice.

“Fade And Blur” develops a moodier milieu with Long’s strident guitar glinting off a watery wash of synth strings, as Peterson’s wave-like cymbals crash against the syncopated rhythm of the drums and Schwanke’s animated fretwork on bass. Gina enters with a cautious vocal that becomes more robust in the choruses, a Kate Bushy angelic choir in the bridge and a dramatic guitar interlude swell to another opulent chorus and denouement.

The quartet of songs concludes with the languorously anthemic “Waiting For The Yes“ whose lovely chorus seems carved straight from the Blondie songbook. Long outdoes himself with a volcanic guitar solo that scatters flaming boulders in all directions. Another memorable song.

This is great stuff, the culmination of years of hard work and perseverance on Gina Noell’s part. Her relentlessly steadfast pursuit of an artistic vision is rewarded here with songs that linger in the mind long after the last note has faded, with productions whose thrilling immediacy enhances only further each number’s individual appeal. The only shortcoming is the brevity of the set. Hopefully, there is a lot more where this came from.