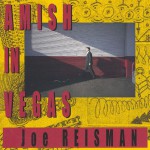 Singer/songwriter Joe Reisman migrated to Portland about three years ago, having spent the majority of the previous two decades in LA, in pursuit of an acting career. Here he links with Pacific Wonderland bassist Tom Simonsen, keyboardist Don Henson and drummer Mike Schmitt, ostensibly from a band called the Headless Clones, along with long-time musical partner, multi-instrumentalist Ralph Davis.

Although he cites Harry Nilsson, the Kinks and Merle Haggard as influences, Reisman instead sounds more like John Mellencamp melded with John Hiatt and Don Henley, with accents of Dylan and John Prine and JJ Cale tossed in for good measure. A lot of the material refers to Texas. One supposes there might be a Texas connection lurking in the history somewhere. The songs display a homespun Western sensibility as well; most of the topics lying within the interpersonal relationship sphere.

The lead track “Pale Morning,” penned by Davis, maintains a scintillating rhythm, chugging through a dark-edged swamp. “Long Distance Man” is an introspective ballad, with tasty keyboard flourishes from Henson. A sweet and simple Pop confection, “I Can’t Do It Alone” also benefits from Henson’s light-handed touches.

Davis’ “Mile Away” sounds most like a Jerry Joseph song. His Charlie Watts-inspired trap work and corn-pone laden acoustic slide work lend the song an air of authenticity, while Reisman splits the difference between Mellencamp and Jagger for the vocal lead. Solid. “Lullaby In D” is a pleasant ballad featuring a sweet vocal contribution by Mariel Pastor.

Reisman’s seven compositions don’t quite meet the high standards that Davis’ three contributions set. But they are competent enough to make of this a very satisfying outing, full of intriguing moments. Quite nice for a first release. 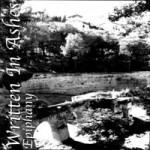 Noted author James Joyce referred to an epiphany as a “showing forth” by which an individual “gave himself away.” When Joyce observed and recorded such events, the epiphany was his own. In non-secular terms the word means the sudden apprehension of the evanescent essence or the deeper meaning of a thing. Something like the light bulb switching on in the brain. Boing.

For Written In Ashes, the epiphany lay in the manifestation of power this Goth quintet generates. Over the span of an hour, through the course of the eleven tracks on this album, one comes to realize the depth and scope of that power.

Our old friend darkness is ever-present among the baker’s eleven tracks presented. Vocalist Kevyn Hay has a robust singing apparatus. he and bassist Michael Draper are the primary movers in the band. Draper, who honed his chops with Sylvia’s Ghost for many years, provides, along with drummer David Battrick, the essential rhythmic impetus.

Guitarist, Nathan (since replaced by Patrick Guzzardi) delivers well-executed, Metal-informed guitar lines, as well as some touching piano phrases to the song “Sinners.” He is abetted on keyboards by Ms. Fritter (recently a second keyboardist, Christopher Robin, was added to the band).

There are hooks aplenty within the music: contributed by Nathan’s thick, dense guitar-work and Fritter’s ingenuous keyboard passages, Draper’s melodically energetic basslines and Hays’ dramatically intoned vocals. Together, they create original music, which bears no overt resemblance to any other band.

The first track, “Shattered And Gone,” neatly illustrates several of WIA’s strengths. Over Draper’s gently rolling bassline, Nathan layer’s jagged guitar beds with droning motifs, as Hays defines the vocal boundaries. By the time the memorable chorus rolls into the sonic picture, the hooks have been deeply set into the listener’s psyche.

“And The Stars Sang,” as with “Wash Away” and “Please,” tumbles in 12/8 time, driven by Nathan’s murky guitar stylings and Fritter’s stuttering piano arpeggios. “(When I) Knew” rides upon Draper’s percolating bass, which dances upon Battrick’s vibrant toms, Nathan’s shimmering guitar riffs and Fritter’s moody synth pads. Another memorable number.

Not every song is a hit. “Will Of Wills” and “Inauspicious” sink from the weight of their own ponderousness. “See The Truth” has a tendency to plod. Hays occasionally sings out of tune. He sometimes seems to run out of ideas for vocal melodies. But Draper is a motivational bassist of the highest order. And Nathan, though now departed from the band, lends nearly every tune a distinguishing guitar feature that is inventive and well-played.

Together, Written In Ashes create a slightly ominous, often gorgeous sound, with enough flashes of energy and depth to overcome the sometimes weighty nature of the lyrical sentiments. Tight execution and imaginative arrangements make of them a band to watch. To discover Written In Ashes would be an epiphany indeed, for any listener. 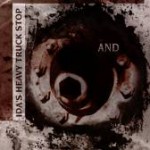 Guitarist Jeff Bryner spent much of the ‘90s playing in support of Michael Jarmer in his band Here Comes Everybody. Here, Bryner is given the lead and Jarmer returns the favor by playing drums in support of the adventurous guitarist, along with bassist Steve Louden. The work of Adrian Belew was probably the point where Jarmer and Bryner originally met.

But from that loci the two depart in vastly different directions. Whereas, with HCE, Jarmer maintains an underlying Pop sensibility within his material, Bryner is much more of a musical challenge. And, given free-rein, Jeff travels to some rather remote musical localities.

Bryner’s guitar pyrotechnics on “Trying, Failing” and “Reeky Parasites” are reminiscent of those of Dean De Leo of Stone Temple Pilots. A schizophrenic crunch propels the tune. “Finally” takes a different tack. The 12/8 framework of the rhythm underscores the less frenetic qualities in some of Bryner’s compositions.

“Zen” works from a distinctive nocturne-like chord progression, incorporating Jeff’s slippery vocal lines along the way. One of his better songs. “This Is” serves as a corollary to the previous song. Bryner shifts gears with “Creepy Velvet Cars.” with simple acoustic guitar accompaniment and a hint of a synth cello, he delivers another of the album’s more successful songs.

In the title track, Bryner makes use of modified Hendrix-like riffs, incorporating a similar sense of invention into his sketch. Louden’s bouncy basslines sound like they have been fed through a wah-wah peddle on “Betty.” A nice percussive effect behind some impenetrably obtuse lyrics.

“Washing her shoes in the sink/Coloring blues in pink/Betty the outcast neighbor/Faking the news some think/Drink in her bleeding and festering stink/Bleach every moment, alone in identical womenswear/Reach in and own it, queen of the next number/Mall girl, rotting in place/Escaping and urgently anywhere.” A strangely affecting tune.

Similarly, the lyric to “Ida’s” seems to capture a certain aspect of American small-town life, perfectly simulating the suffocating constriction and stifling claustrophobia. Still the plausible connection here to the obscure name of the band is difficult to ascertain.

Jeff Bryner does not make music for feeble minds. But the inherent esotericism in his work guarantees limited appeal. Plowing through the fourteen songs here (none of which extends much beyond two and a half minutes in length), leaves the listener fatigued. It’s music that requires real effort to audition. Not so much listened to as endured. 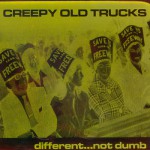 Here’s an Aggro power trio with a little something extra to offer the discerning listener. Drummer Gary Cleaveland has left the band since the recording of this five song (although there are songs within songs here— toting up a tally is a wholly arbitrary endeavor) opus. Remaining members Scott Arbogast and Tom Potts are the foundation of the band.

Their tight, sinewy interplay between guitar and bass leads to a variety of moods and atmospheres. From snarling, Rage Against The Machine-like sermons, to more subdued prayers, Scott and Tom exhibit an arsenal of chops, with stylistic influences aplenty. They are looking for another drummer. By all accounts he had better be pretty versatile and very proficient.

The medley “Power Grab” begins with the movement entitled “Shitstar 2000,” which starts as a Pink Floydish dirge before evolving into a streamlined spaceship of an instrumental piece. From here, they launch into the “Sboobs” section of the song: an adolescent rant— “Sboobs is boobs toot toot,” which pretty much reads the same forwards or backwards. Toot toot. Finally, the meat of the suite, “Stole Me,” transpires like a spontaneous immolation. Up in flames. Whoever is singing here pushes the highly-effected vocal with barely-contained rage, finally screaming into a soaring venomous siren of a tone. Apparently Potts and Arbogast have a problem with drummers.

The song “Womby” begins with brushed  drums laying a warm wind across lilting bass chords and swaying palm tree acoustic guitar in the “Coffee 3” movement, similar to the intro to the Beatles’ “Here Comes The Sun King” fragment on Abbey Road.  This gives way to the 12/8 thrust of the “Bblurry” part of the number, a Jazzy interlude. The section entitled “Fuzz” is a dreamy polyrhythmic mantra.

The “Mall 205” part of “Mitchell Cribbits” is a frenetic rap that memorializes a “tilt-a-whirl” ride at the Eastside mall. The “Mothra Stewart’s Vineyard” portion of the song is simply bizarre. With chipmunk-like back-up vocals and guttural drunken lead vocal, the movement sounds like Captain Beefheart fronting the Mother’s of Invention, telling a truly Bukowskian tale.

“It’s cause your liver is full/It flows over into your inner ear/Your equilibrium lost, you fall around/You’re waving in the moss, you roll into the grass/ Cause you got to roll out of the gutter/And it’s nice on the lawn.” Ouch! Look out!

From there things slowly become more surreal. “The Good Omen” begins with “Tidal” a lazy piece of exposition that includes some great Jazz rolls from Cleaveland. Subsequently  the “From The Spin” movement unfolds like a badass raga with droning bass, sitar-like guitar and chattering keyboards.

“The Effigy” deconstructs further. First, “Harasser” includes an actual message from a collection agency, over which the lads layer various incongruent sounds: musical and non. “Wheels” takes a detour, investigating the narrator’s penchant for automobiles. Part three of the song, “Nawlins,” is decorated by a farting slide trombone sound, played against a syncopated drum beat. They finish, ending the last song with a faux-Latin parable that turns into a pretty ugly shaggy dog story.

Creepy Old Trucks are an imaginative unit. They make complex music to accompany abstract lyrics. They deliver this melange with a certain fervor that is undeniable. While the band has yet to fully find their own voice, intimations of a sound are enough to whet the appetite for future excursions.